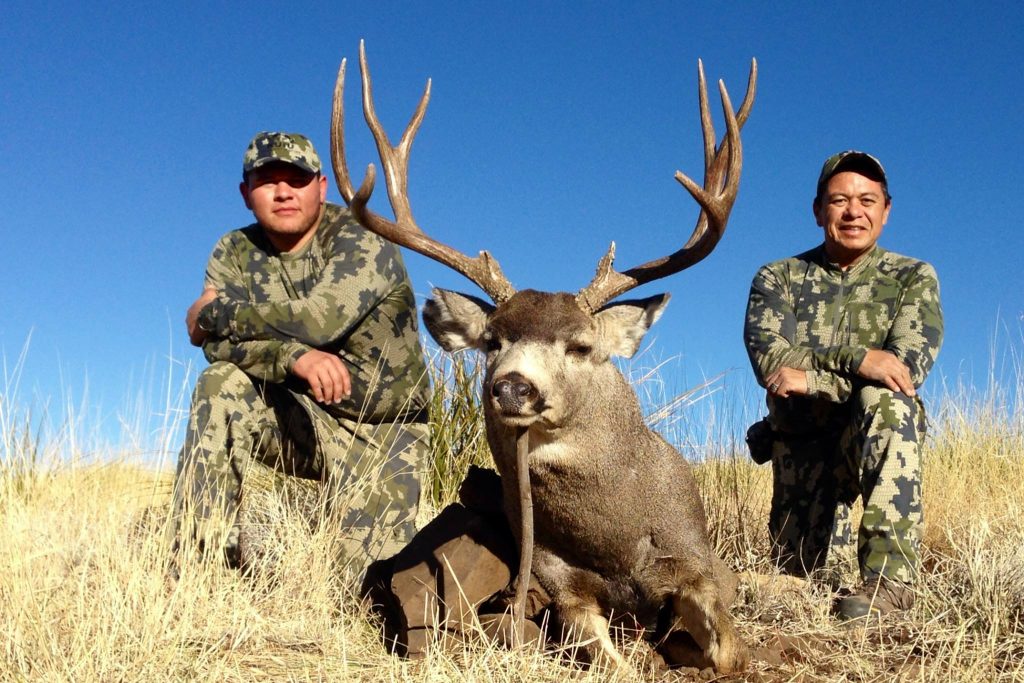 I hunted with Big Chino in the Fall of 2009… Archery Elk in Unit 8. As companions, guides and mentors, JP and Michael were awesome. These guys are skilled guides and elk hunters! The level of organization, the quality of the gear and the chow were all first rate. It was the best hunt I’ve ever been on and one of the best times I’ve ever had PLUS I ended up with a trophy of a lifetime. There were times on the hunt when elk were hard to find: I was especially impressed with JP and Michael during these “slow times”… they kept their (and my) attitudes in the right place. Big Chino comes highly recommended for trophy elk in Arizona.

“I hunted with Big Chino the late 2009 hunt for bull elk in Unit 23 (December). JP and I had a great hunt overall taking a beautiful 330″ 6×6 bull the last day of the hunt. JP provides very comfortable camps and is incredibly knowledgeable about elk. He understood their behaviors and put us in position to be successful several times during the trip. We faced quite a bit of adversity throughout the hunt because of some very severe weather, but we persevered to the end ultimately resulting in success. JP was willing to do whatever it took to bring success to the hunt. I truly enjoyed his company and am looking forward to hunting with him and Big Chino Outfitters down the road. Thanks for the great memories Big Chino!”

I was an archery hunter with JP and I did take a nice 6×6 with him. He’s a good guy with a lot of knowledge about elk hunting. The guy can talk to elk like no one I have ever seen before. I would go back with him if given the chance.

I was very impressed with JP and the crew. Taking my elk 15 minutes into the first day a nice 6×6, other hunters in camp also taking a 6×6 and a 7×8 that would go around 400. Camp was well organized and the food was great. What impressed me most was there knowledge of the local elk herd; hope to draw this year so I can return to the Big Chino camp for that 400 incher.

When I drew my tag, I was about 6 months pregnant with my first child. Arizona Fish and Game confirmed my suspicions that you can’t assign the tag and it’s either “use it or lose it”. I was referred to JP and told him that I’d need special arrangements for my hunt. His immediate response was no problem. But when I told him the special arrangements would include accommodations for my newborn daughter and her grandparents, he said mmmm, let me get back to you. A few days later, JP had booked a ranch near Williams for me and his other hunters. What a place! We’d head out at 5 a.m. and hoof it up and down the mountains until well after dark. But heading back to that ranch was heaven. Happy baby, happy grandparents and happy huntress when JP helped me get that tough elk on the last day. Thanks JP!!

I arrived as a client and left as a friend. I saw animals you only see in magazines, stocked Mule Deer that would make any hunting host envious. The end result is I took the largest Mule Deer in my life with a Bow. Thanks to the unbelievable efforts put forth by JP and Mike Vicente and their support team. If you are looking for an early season OTC hunt for Mule Deer, and want to raise your skill level a couple notches or more, I highly recommend spending a sunny August spotting Big Mulies with Big Chino Guide Service in Prescott Arizona.

JP, We had a great time Thank You again. I truly enjoyed riding around glassing and visiting with you…it’s not all about shooting a deer. The opportunity also provided confidence and growth for KC. I wasn’t with him telling him every step of the way and…boy did he ever put it together…what a shot..you will see the exit on a couple photos.

I just wanted to email you all to tell you how fortunate I was to have the pleasure of having Pat McCarty as my personal guide for the Late Bull Elk hunt this year and to have Wade Parker supporting my hunt as well.

I am very good at my job and I got that way through hard work and persistence. Pat and Wade both possess both those traits. Every day they got up early and literally blazed a trail into the mountains to find bull elk for myself and the other hunter. Their hard work and persistence paid off for both me and the other hunter. I could not have been happier walking up to my 6×5 elk. I felt like a kid on Christmas day who got the present he always wanted. J

I cannot begin to tell you how impressed I was by Pat and Wade. Their professionalism and skills as elk hunting guides is above par. I learned so much from both of them and their knowledge of elk and Area 8 was astounding. They should be considered major assets to your guide services.